process of a Fairy Tale pt4.

Ok, took a lot of photos of this as I was working on the painting, hopefully you can see my process. 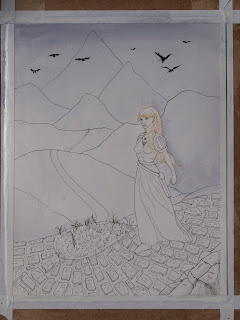 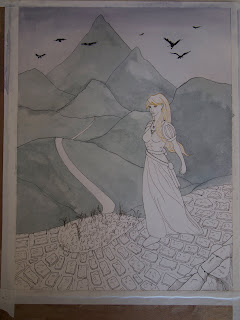 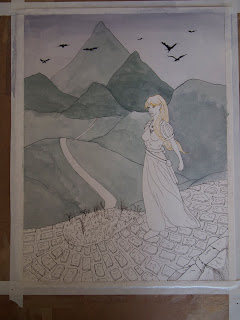 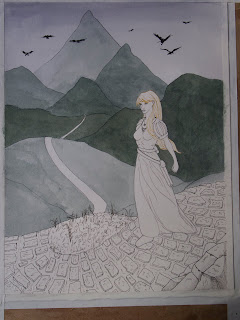 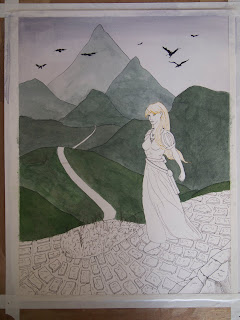 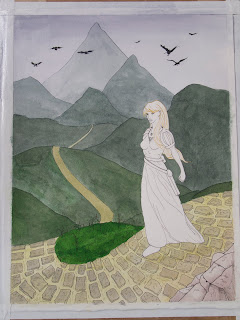 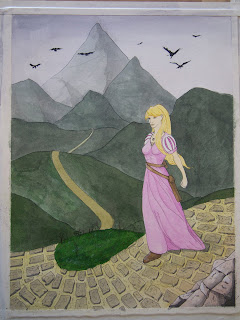 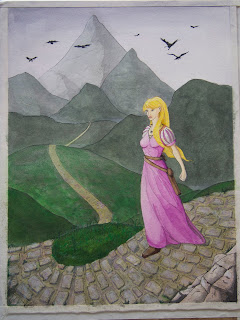 Posted by Unknown at 5:51 PM No comments:

Process of a Fairy Tale pt3.

Here is the pencil corrected and inked illustration. 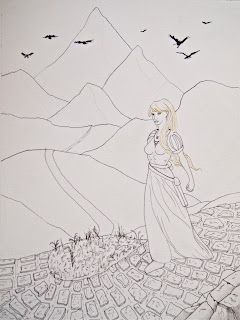 Posted by Unknown at 9:47 PM No comments:

Here's a plug for my new blog, "I'm Snapping Daily", where I'll put up one photo a day.

http://imsnappingdaily.blogspot.com/
Posted by Unknown at 10:09 PM No comments:

something a little different

I had to create a proposal for a fine art project in my HUMN311 class...thought you might enjoy seeing how I'd do a non-illustrative project.

By applying techniques from one discipline to another, it is possible to create a break in our understanding of what is possible within a medium, and to open up new ways of thinking. To explore the nature of reality, time, trauma and awareness of catastrophic events, I propose to use the "bullet-time" cinematic technique to document the destruction via explosive force of a suburban home.

The bullet-time method of filming involves shooting many still-image cameras simultaneously from multiple angles of the subject, and then stitching them together to create a virtual fly-around, where the subject appears to be frozen in time and the observer is moving. According to Lister, “A sweeping arc of cameras surround an actor...and simultaneously shoot a single frame. A movie camera at each end of the arc records motion up to and after the 'snapshots' (155). Although The Matrix pioneered this technique in modern cinema, it has a much longer history. “We could even trace such multi-camera chronophotographic excursions as far back as the motion studies conducted in California in the 1870s by Eadweard Muybridge, 'the man who split the second' (Gillis 54). I will set 120 film cameras surrounding a family home in the suburbs, and then use explosives and special-effects techniques to blow it up violently and in as cinematic a manner as possible. This explosion will be shot by all cameras simultaneously at its peak, and the resulting still images will be converted into a five second movie that endlessly circles the devastation. Unlike the classic use of bullet-time, there will be no entry or exit from the event. I propose to increase the sense of unreality and tension by never allowing the viewer to resume a less controlled sequencing of events.

The resulting video will be shown concurrently on a bank of nine televisions set in a three by three stack on top of each other. All of the televisions will be slightly out of sync from one another. On each screen, a different scrolling news-style marquee ticker will be rolling on the bottom of the television. Although the explosion will loop in five second increments, the nine different marquees will each be five minutes long, and will rotate across all of the televisions, creating a total loop time of 45 minutes. The false headlines will be 50% related to the explosion, and the rest will be drawn from economic or military-styled news reporting. None of the text will describe the cause of the explosion, instead they will speak as if that information was common knowledge. This method of display will tie the event visually with the style of news reporting of the burning towers from 9/11 America. As a New Yorker during that time period, I was bombarded with the same repeating stock images of the World Trade Center for almost a year. It was an inescapable part of my life. According to Greenberg, this repetition is a common response to emotional events, and one I wish to draw attention to. “We know that one of the hardest aspects of trauma is how survivors may unwillingly repeat the scene” (32). Common wisdom suggests that confronting and expressing trauma helps to deal with the event, but the nature of film and cinema works against this. As has been discussed at length, the ability of film to freeze time creates an environment where the traumatic event is relived over and over again. Unlike with memory, the emotion retains its power and does not dull over time. “The unavoidability of the visual representations of the event drew repetition outward and made the very work of witnessing into the experience of trauma, as opposed to a mode of its therapy” (Saltzman 273).

The World Trade Center created a traumatic assault on the American Dream. With my project, I propose to take the same repetition and trauma and apply it to the notion of suburban safety and comfort. Suburbs are thought of in an almost timeless and static way. We often hear them called “slow”, or “sleepy”, and there is a level of security in that. By the use of bullet-time and false news reporting, I will take that emotional stasis and flip it to a physical one, while at the same time showing evidence of a massive and destructive change taking place. Like Muybridge's photos of a horse trotting gave the viewer the ability to finally understand the mechanics of it's motion (Solnitt 6), the continually frozen and rotating explosion will give the observer the ability to experience the mechanics of trauma and devastation. I propose to draw attention to the fact that in the same way it is hard to take Muybridge's horse photographs and emotionally “feel” the horse's movement, a frozen in time traumatic event can be mechanically understood without being emotionally controllable. As Campany mentions when he talks about Barthes, it is this freezing that causes a pensiveness, or “moment of anticipation when things are in the balance” (Campany 96). I'm hoping that this moment of anticipation can be heightened and made more apparent through the introduction of an even more explicit stilling of time.

The success of this project lies in the use of techniques from different disciplines, and how they tie together. The still photography of bullet-time is necessary to freeze time and give the desired sense of clarity to a cinematic event. The scrolling news ticker borrowed from mainstream television reporting creates a way for the viewer to enter the piece and attach it to reality without introducing temporality to the traumatic event itself. The bank of televisions used to display speaks to the voyeuristic ability of Western society to experience events everywhere, and is meant to represent the notion of an electronic stores front window. Additionally, the repetition of screens is a sculptural technique to increase importance. The installation will give observers a theoretical understanding of the explosion, without ever moving beyond, or seeing the cause. By applying the news headlines, the event will be grounded in a familiar mode of viewing disasters, but the use of the “bullet time” freezing will create a cognitive dissonance and a sense of unreality. I hope that it will give observers insight into how they think of disasters, and the mediums they are reported with.

Process of a Fairy Tale pt2.

Pencils, and then some changes. 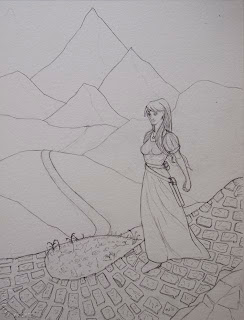 Here's the next version... 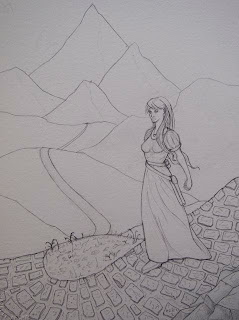 Posted by Unknown at 8:05 PM No comments:

Process of a Fairy Tale pt1.

Ok, so I'm working on the "Grimm's Fairy Tale" challenge over at The Art Order. I've chosen the story "The Seven Ravens", here are my initial drawings.

I started with thumbnails to work out what in the story I wanted to illustrate. 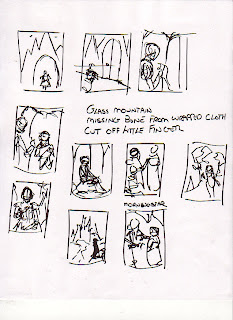 From there, I did a series of roughs, working through the composition a bit. 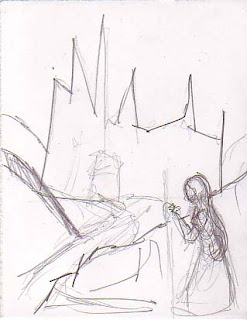 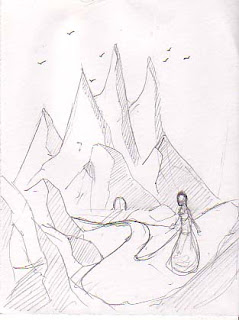 Then I did this very loose watercolour sketch... 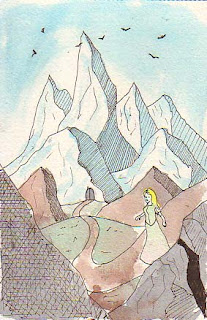 After the sketch, I realized the composition would be better with the girl larger, so I did one more rough... 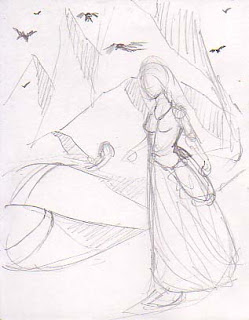 Finally, I played around with some ideas for the girl and the 7 ravens. 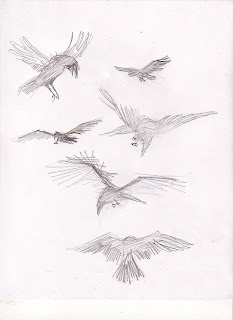 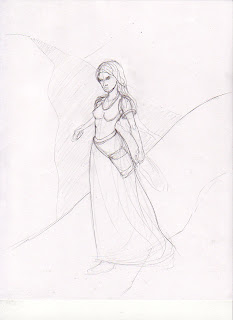